Author Vicki Peterson is allowing us to preview here a story that she will submit to the Pen Women national magazine for publication in the coming months. It’s a delightful reminiscence that explains why, should anyone require an explanation, Victoria Stoddard Peterson does not like chèvre. 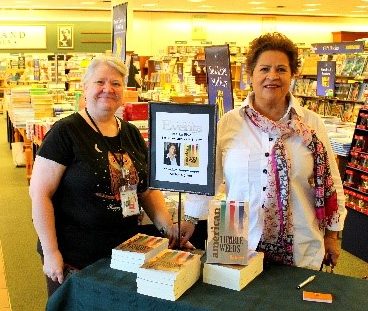 Everyone misses the person-to-person contact of yesteryear.  These days, corona virus mandates that events, meetings, etc., be “ZOOM-ed,” a new verb that sounds as distant and cold as the computer screens required to participate in this high-tech experience.

During my career, I made a point of working behind the camera. Why? Because the unblinking camera lens is relentless, scrutinizing imperfections up close and personal.

Fortunately, the women of the Moody River Estates Book Club put me at ease immediately. In June 2020, the ladies invited me to participate in a discussion of my novel, American Tumbleweeds, via ZOOM. Their warm-heartedness radiated through the screen; they clearly had spent time thoroughly reading my novel—a privilege I sincerely value.

I’m always fascinated by the unique interpretation each reader has of the same journey. There’s nothing more satisfying than a reader expressing concern for my characters as if discussing old friends. It lets me know readers discovered a part of themselves in the pages of my novel. A most gratifying reward for any writer. The ladies’ acute observations and abiding remarks nourished my soul for future projects. This was an inspiring conversation greatly needed during a period of isolation.

I still long for person-to-person readings, but the remote experience with the Moody River Estates Book Club provided a gratifying alternative. Thank you for your support, Ladies! 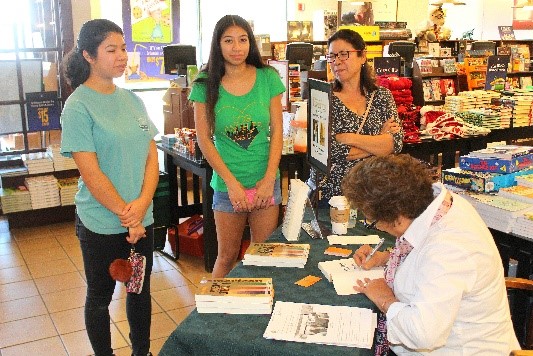 The Florida Watercolor Society recently challenged its members to submit artwork created during their Covid-19 pandemic confinement. Pen Woman, Cheryl A. Fausel, contributed two paintings to the sale—for a sale it is!

Yes. You can purchase any of these works of art for yourself, or as a gift for a loved one!

You know, the imagination cannot be confined. Nor can emotion. Artists, for instance, often produce their best work under duress. Artists are gifts of the gods, who, after all, gave us lemons in the full confidence that we would figure out how to make lemon martinis.

So lift your glass and let us celebrate our artists!

“Lemons on a Ledge.”

(What was I saying about lemons?) 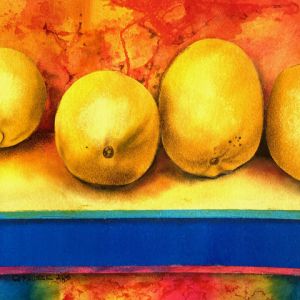 You will find Cheryl’s two entries among the artwork at the purchase link above. It’s like the fun of hunting for Easter eggs in a flower-filled meadow.

Listen…to the Whisper of Your Heart

Constant motion of emotion interrupted by the stop and go

Of politicians and everyday citizens championing wisdom and nonsense.

Only you can decide what’s right.

Nature calls outside my window, silently observing, as we rip each other apart –

The sanctity of silence, gone.

People arrive by boat determined to exercise their right to – PARTY!

On the road, traffic speeds by toward Pine Island,

Anxious drivers seeking justice for past atrocities of waiting in long traffic lines.

Nature warns us – its alarm ignored,

What to do when all our exits are blocked;

When voices scream, I can’t breathe – from hospital beds and city streets,

When the youth of America continues the struggle of a long, drawn out fight.

Not to screaming voices of frustrated Americans and activists.

Listen…to the whisper of your heart;

It knows, you know –

Something is wrong, and only we, can restore the sacredness of humankind.

Lorraine Williams just sent in this wonderful news.
“My poem, ‘Hummingbird’ will be included in First Wave, the first Beach Bards Anthology in New Jersey.”
An excellent accomplishment, but not the first of its kind for Lorraine. “Last summer,” she admits, “I was the ‘Beach Bard’ for June.” This month last year, Lorraine was one of two featured poets at the Beach Bards Poetry and Prose Reading series in Sea Isle, NJ.
But that’s not all.
“My Poem, ‘One Morning,’ has been accepted for publication in the Tribute Anthology honoring Lawrence Ferlinghetti, the former Poet Laureate of San Francisco, who founded City Lights, an independent bookstore ahead of its time, which featured many of the Beat Poets and continues as a mecca for writers today.
“Personally, it’s kind of cool to have my work published on both coasts,” she says.
“Kinda cool” is not how I would describe this remarkable confluence of events. But then, I’m not a poet.
Here’s a delectable tidbit from “Hummingbird.”

And another from “One Morning”…

“Poetry is the sun streaming down…in the meshes of morning.”  Lawrence Ferlinghetti

Late September sun warms, as I  cross the street to City Lights Bookstore,

and climb stairs to the Poetry Room where I

plan to read and maybe buy a book or two,

As soon as the anthologies are published, we’ll let you know.